It may sound like a joke, but a type of hockey played on the bottom of a swimming pool is becoming a serious international sport.
Also called Octopush, underwater hockey began in 1954 when a man named Alan Blake played this game with other divers in Eastney Swimming Pool, Portsmouth, England. At the time, there were only eight players on each team (therefore the name “octopush’) but the number of players has since been changed to ten.
The aim of this sport is for two tams to compete with each other and manoeuvre a puck across the bottom of swimming pool into the opponent’s goal.
How is this sport played? Ten players from each team are needed to compete in a game. Six can playe at any one time and the other four players can continually substitute. The puck is placed in the middle of the pool and all players must wait in the water and touch the wall above the goals they are defending. A gong or buzzer will go off to start the game. The palyers can freely swim anywhere in the play area and try to score by manoeuvring the puck into the opponent’s goal. Each game consists of two halves, typically about ten to fifteen minutes for each halve. 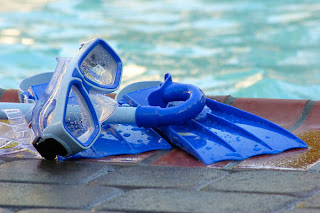 What about the equipment needed? Well, there is  no restriction on swimwear, but the players are advised not to wear baggy or loose non-sporting garments to avoid snagging during the match and reducing the player’s speed too. Other equipment needed are masks, snorkels, fins, short sticks, a puck, hats, gloves and the goals.
Since this game is played underwater, it is not spectator-friendly. One must enter the water to view the full effect of the game. At certain tournaments, live footage is shown on big screens for the spectators. This make it a very exciting spectator sport.